Encapsulation and Abstraction in 3D: Modules for Vase Sculptures in OpenSCAD

This is the first in what I expect to be an occasional series about 3D models and prints that I design. The code for this post, and some 3D models, are available in the associated github repo.

If you get into 3D printing, it's almost inevitable that you'll eventually print a vase. Vases are in a particular sweet spot-- they're sculptural, architectural, and potentially intricate, but with very few structural requirements. You can show off the precision of the printer and its flexibility without worrying that it has to hold a load, or withstand forces trying to break it at layer boundaries. 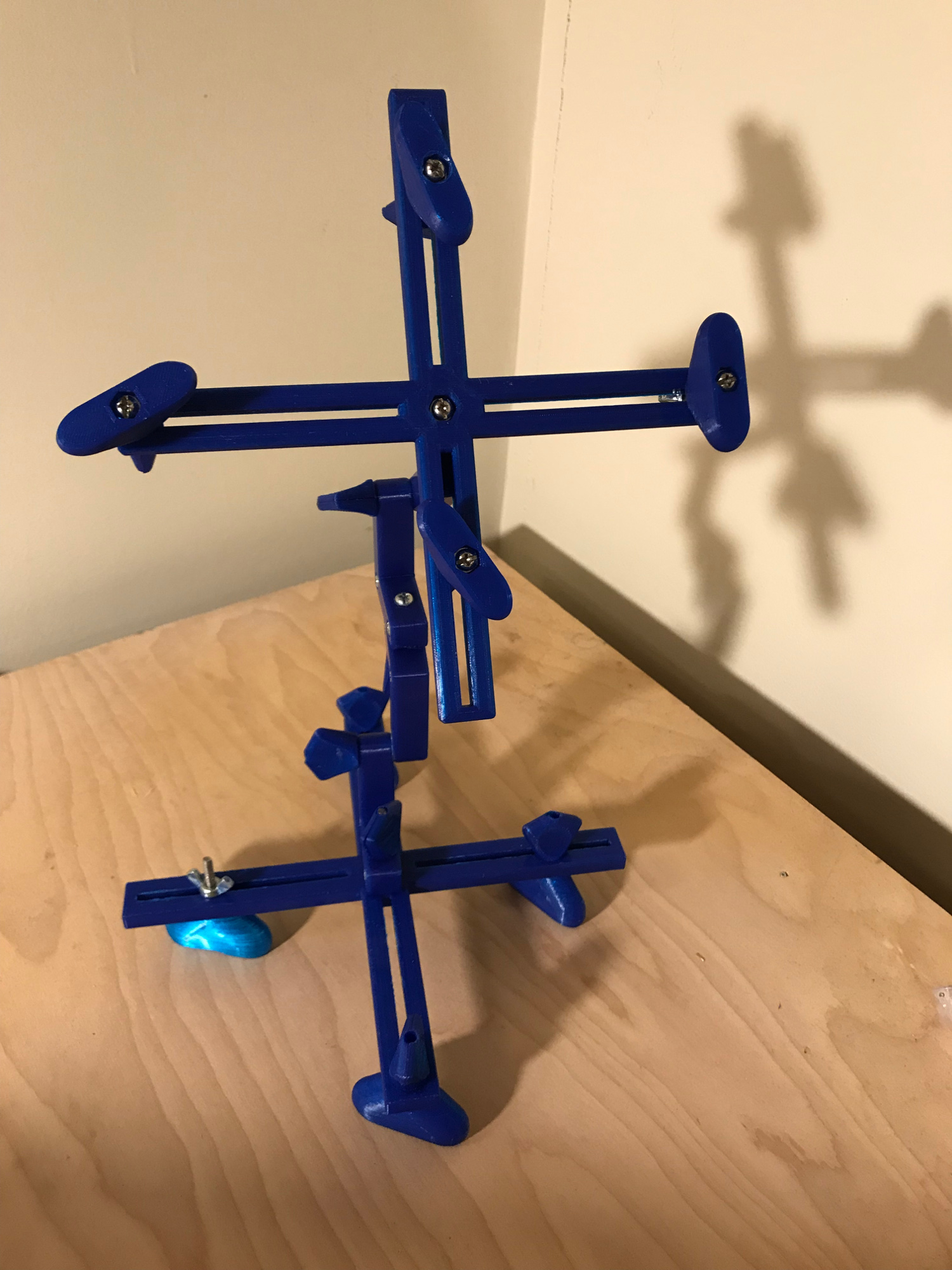 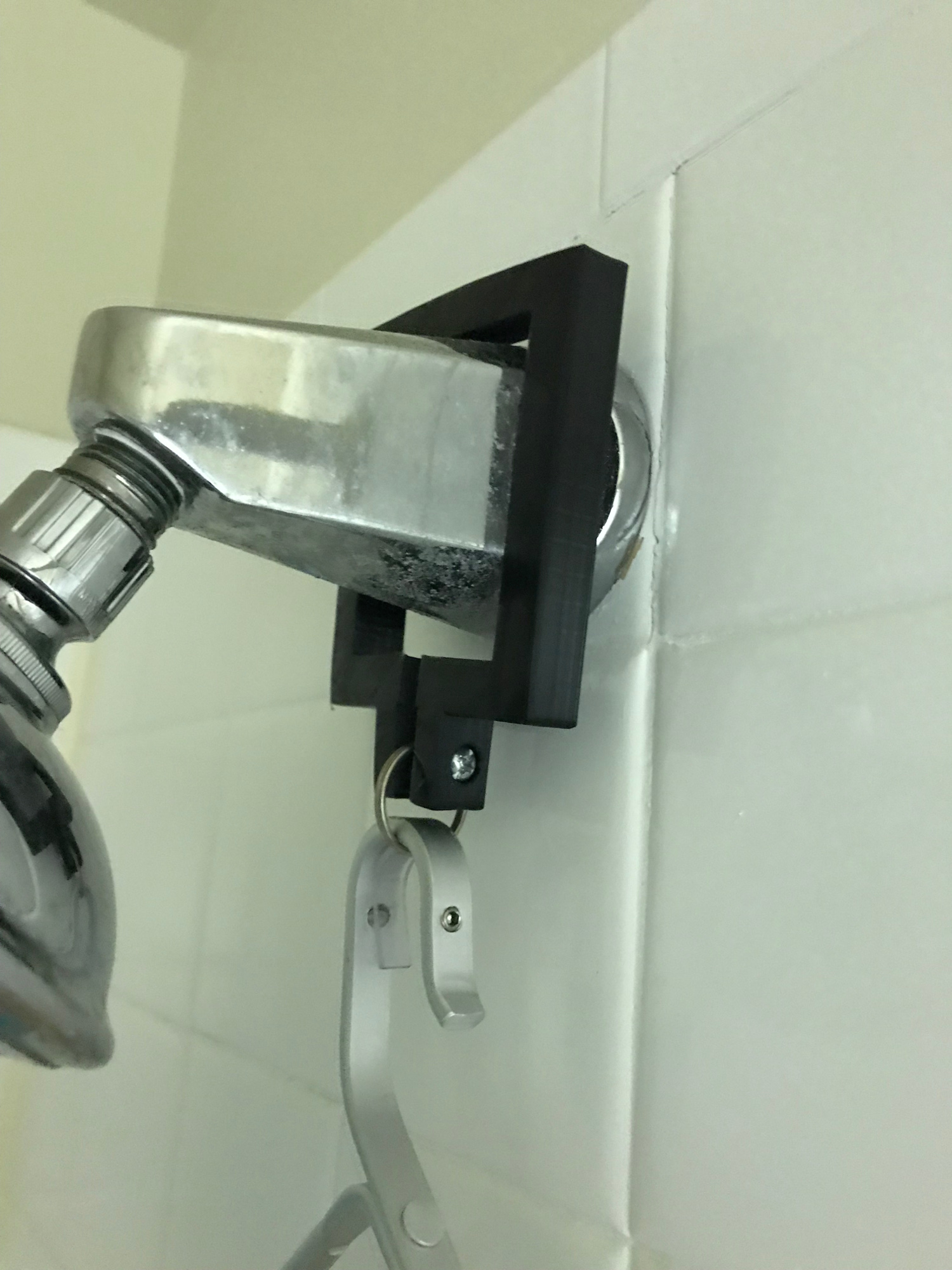 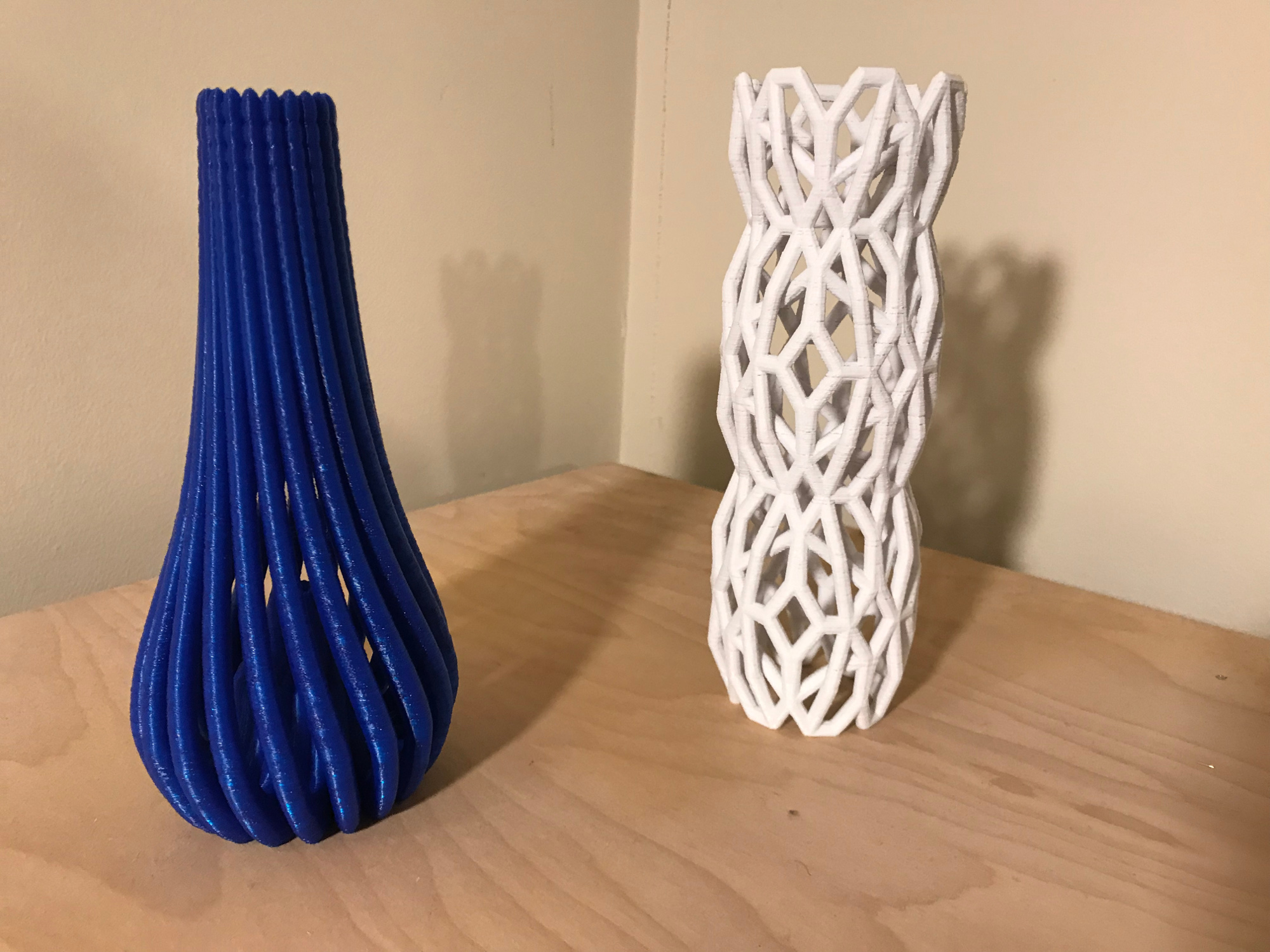 Vases fit the build area of most printers well--they exercise a lot of the Z-axis but their narrow footprint makes each layer relatively fast--a 6-hour print on draft settings instead of a 15 or even 20-hour print for a wider, tall part. And if you broaden the definition of "vase" to include objects that couldn't actually keep flowers in water, you can explore your printer's performance limits as well--how much of a bridge or overhang can you get away with? How small can you make a detail?

My latest vase was an exercise in tiling a simple shape. I took an octogon-based pattern that I found on Wikipedia, modified it for printability, and composed it into a tower structure. The result weighs in at a 64 lines of OpenSCAD, and I was pleased with how it printed. While I was designing it, I got some ideas for library functions, and now I'm back to harvest a few of them. 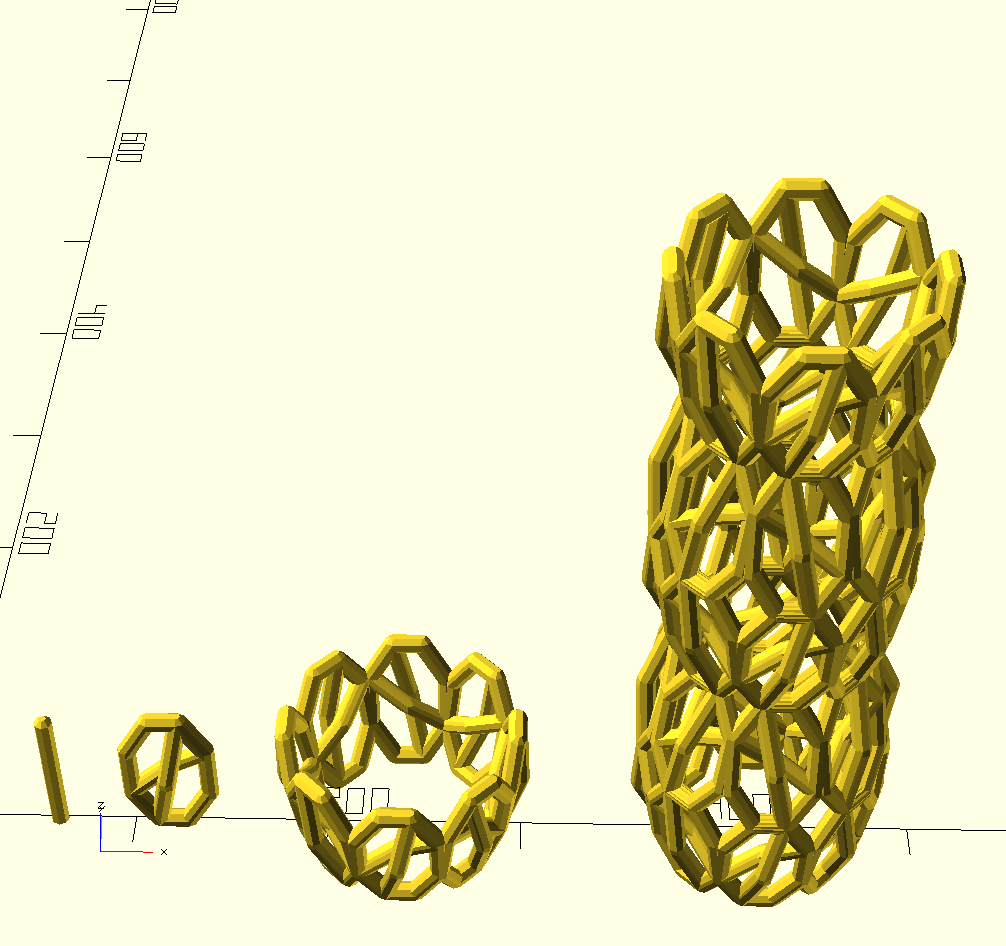 The figure above shows the basic building blocks of the vase. It starts with a bar, then a single figure, which is projected around an axis to form a ring. These rings are then repeated vertically to form a vase structure. In this case, each ring is tilted inward or outward, giving the final product an undulating profile. In each ring, the shape itself is alternated with its mirror image. Other modifications to the basic scheme are possible-- using two alternating shapes, stretching or compressing various aspects, even curving or distorting things. For now, though, I want to build a couple of basic functions that take a simple shape and tile it into a vase. I'll try to keep potential improvements in mind as I go, without getting too distracted trying to follow up on every idea. Start small, stay focused, work hard for a while, write up my notes, then rest. That's my optimal cycle.

I'll use a rectangle as my basic tile. The rectangle will stand in for the octogon from the last vase, or any shape I decide on later. 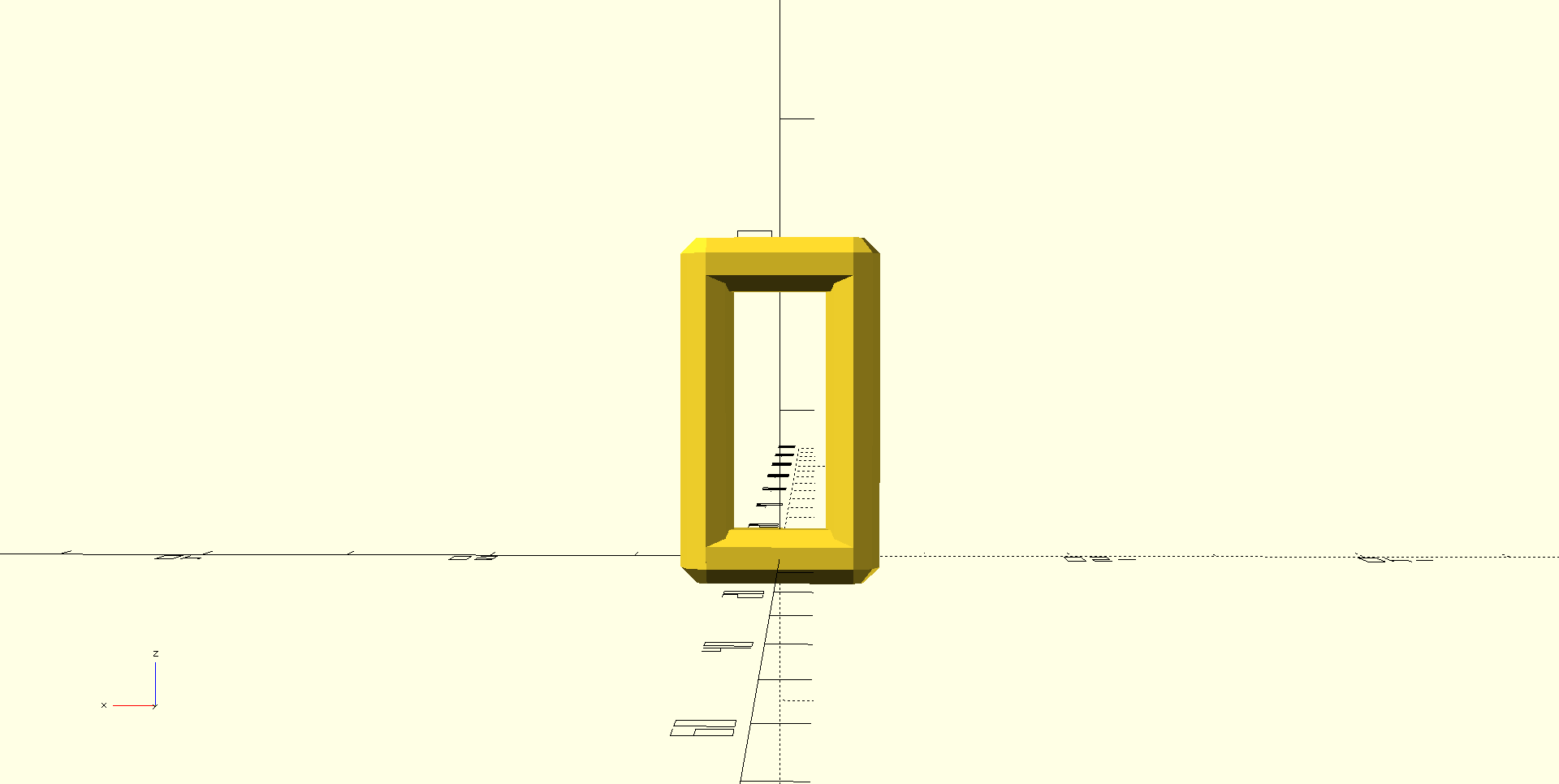 Next, I want to write a module that creates a ring of rectangles. What I want is a function like this:

First, I need to figure out the distance each side should be from the center. The following figure shows four rectangles arranged around the origin. The module needs to figure out how far along the red lines to place the objects so that their edges meet, using only the number of objects and their base width. I can hear my 10th-grade geometry teacher laughing at me. 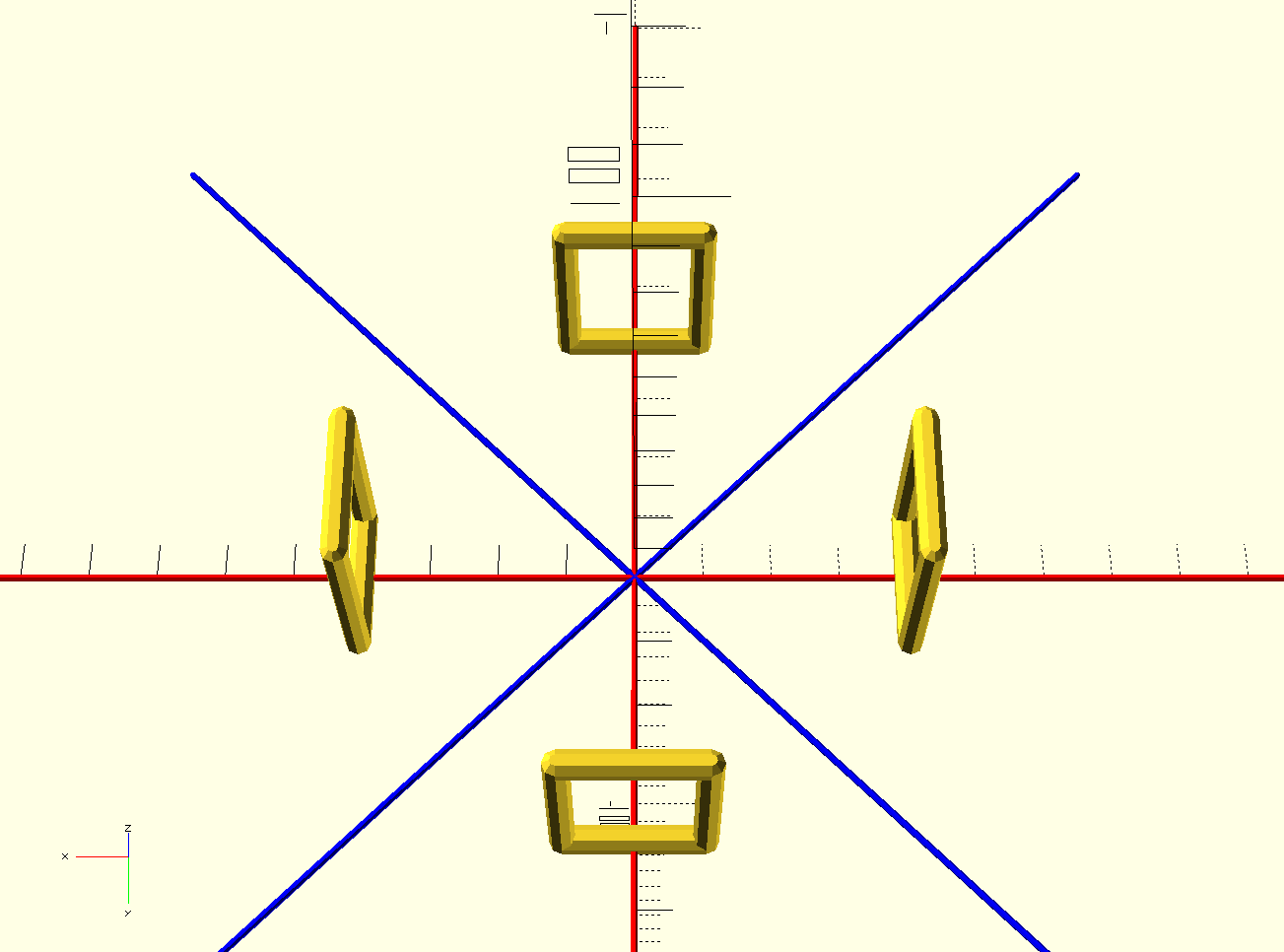 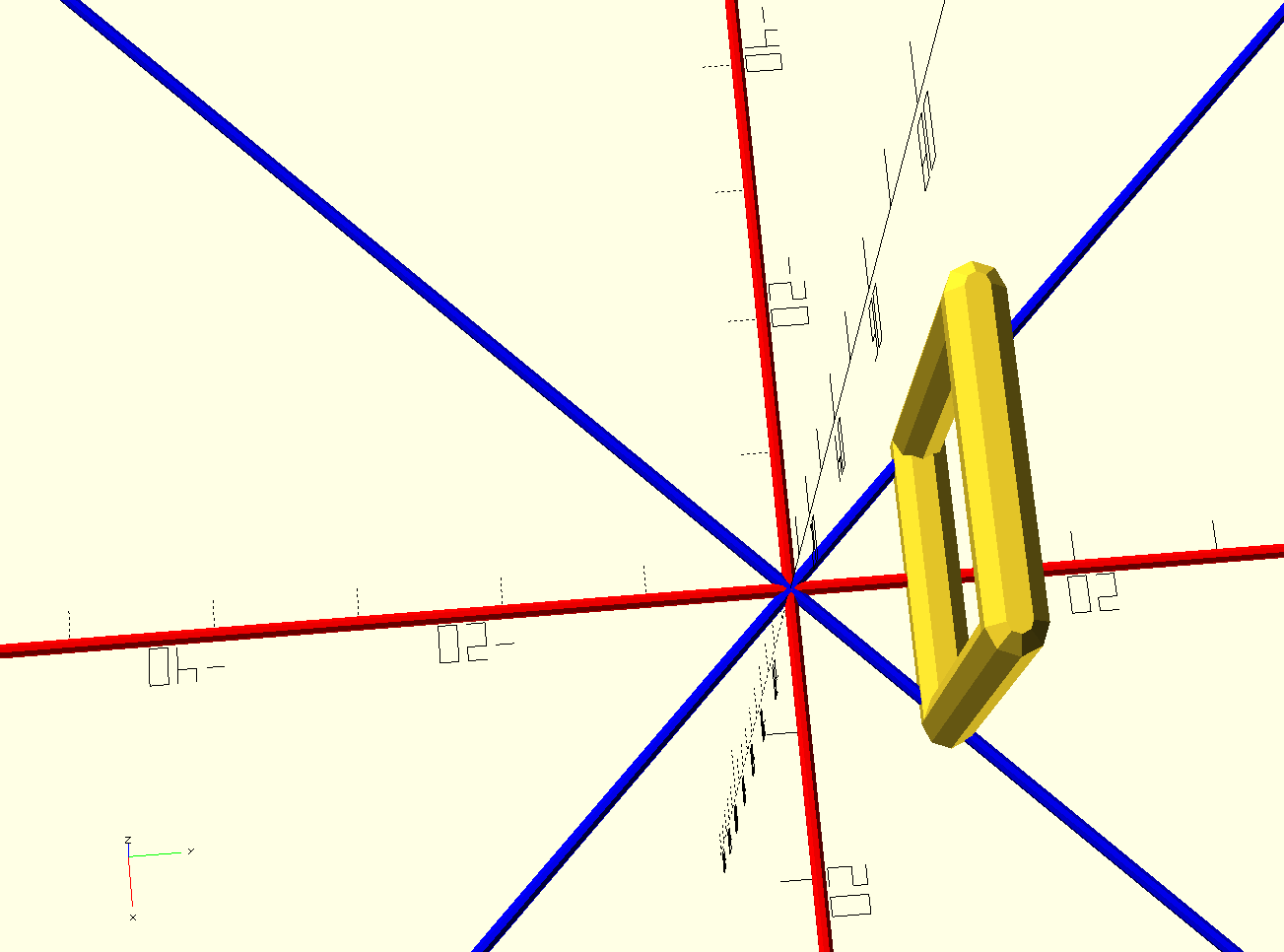 This is pretty nice. If I imagine that the blue line is a function of x, I know that its slope is the tangent of the angle at which it meets the x-axis. And if I know the slope, it's easy to find the point where the value of the function is half of the width--I just divide half the width by the slope. 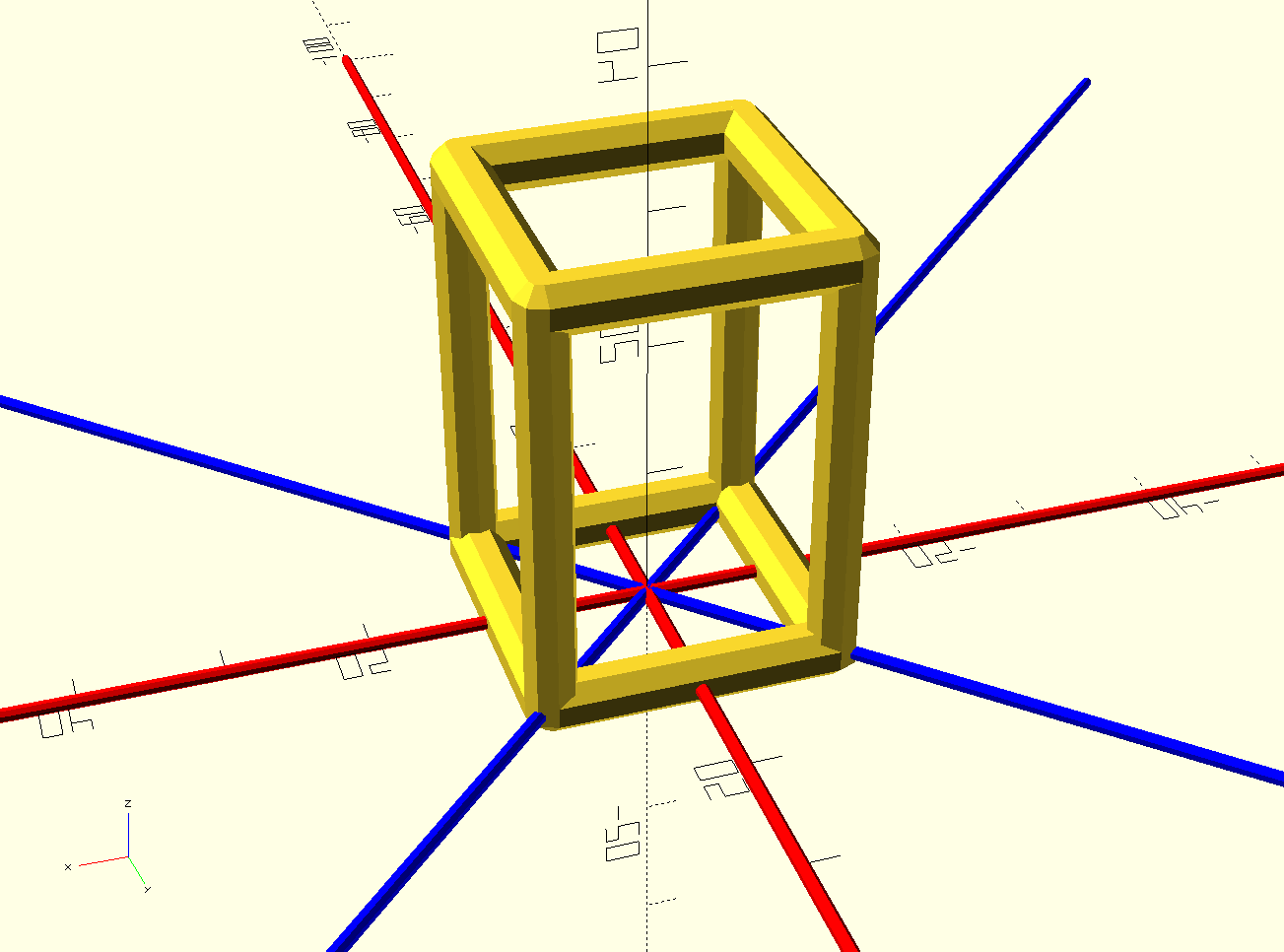 Now I can fill in one missing piece of my ring module:

Now there's an issue. OpenSCAD doesn't actually store models as variables; that is, the expression

is not valid. Another limitation is that modules aren't first-class objects--they can't be passed as arguments to other modules. This makes repeating a shape a bit inconvenient--if I can't pass the shape as an argument to my ring module, and I can't pass the module that defines it as an argument either, I need another way to access it within the loop. Fortunately, there is a way to do this--it's just not very obvious.

Many OpenSCAD functions like translate and rotate affect the models that appear after them in a statement. The following two expressions are equivalent:

In this syntax, the sphere object is one of the children within the translate block. I can use this same syntax within my module:

Now, if I want to make a ring with 47 sides, all tiled with the same rectangle, I can just use

I know I said that I was going to stay focused on a simple use case and not get distracted trying to implement every cool feature I could think of, but there's one simple change to this function that will let me alternate tiles within the ring. The $children variable automatically gets set to the total number of children in the block. So if I just change children(0) to children(side % $children) it will automatically repeat any number of children as it goes through the ring. 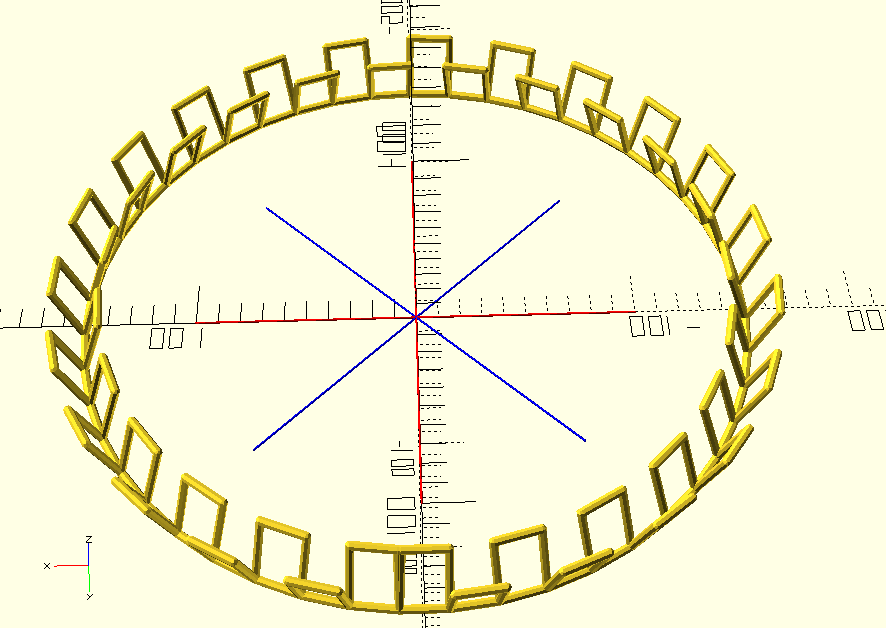 At this point you can see the possibility for some extraordinarily powerful abstractions. For instance, I should be able to make a ring of rings: 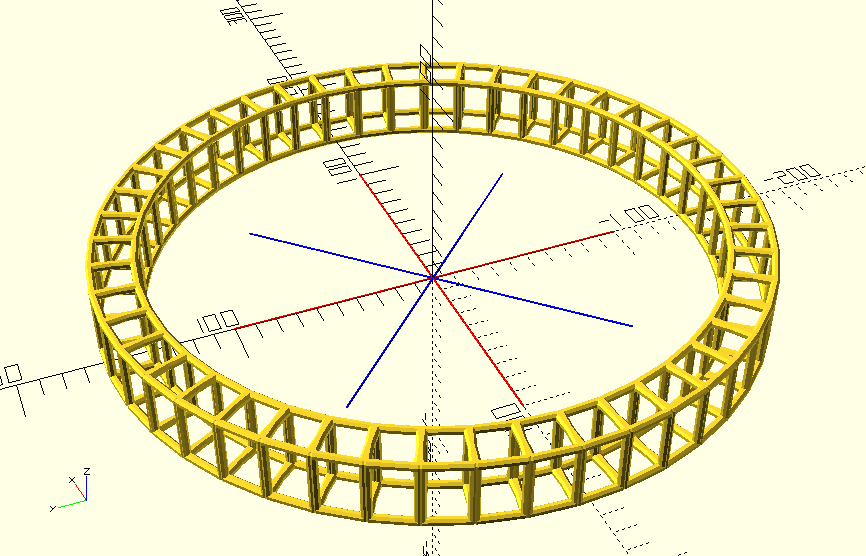 But this was about vases, which means that I still owe a module for stacking rings to make a vase. All the building blocks of that module are already included in the ring module. In fact, it would be easy to add an outer loop in the ring module and an argument to specify the number of levels. But I noticed that it was actually more flexible to be able to specify a series of individual tiles, so I think I'll also want the flexibility to specify individual rings. 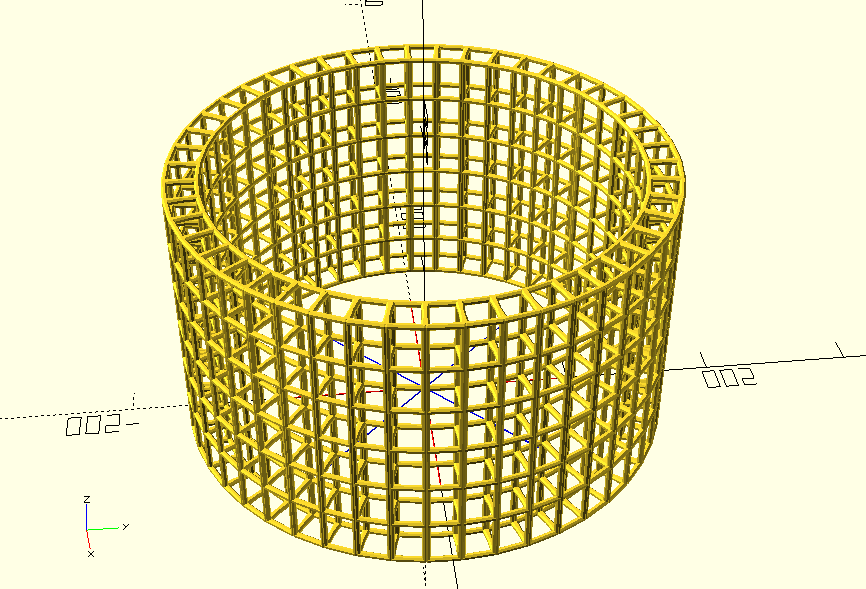 There are plenty of other ways to extend these ideas, but I'm going to leave them as an exercise for the reader. If you found this interesting, I strongly encourage you to download a copy of OpenSCAD and try it out for yourself. All the code is available in the github repo associated with this page.

In the 3d-printing community, it sometimes feels like OpenSCAD is the more "technical" modelling software, as opposed to more "artistic" software that's used for figure sculptures and the like. I think that OpenSCAD requires a lot of creativity, though. The thing I love about it is that it allows you to build a kind of fluency in the language of physical objects-- it helps you amass a personal vocabulary of little tricks and techniques that build on each other using the familiar software (and linguistic!) tools of abstraction and encapsulation. Learning to exactly specify and describe what you want allows you to compose your ideas into more and more complex structures not limited by your own attention span or manual skill. Don't get me wrong; I'm not saying this is better than any other way. Just that creative expression is a valuable thing, and sometimes the medium is code.

Previous:Distortion Fields in OpenSCAD: Computationally Expensive And Not Entirely Satisfying, But Good To Know Anyway
Back
Next:Organic Parametric Shapes: Bézier Curves in OpenSCAD