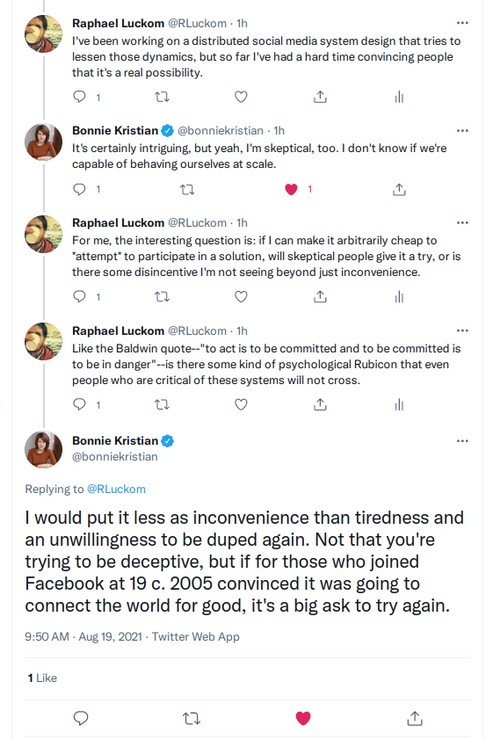 I always feel pretty lucky when I get to have a conversation about my ideas. The rule I try to follow is, “When asking someone for their opinion, don’t argue with them if they give it to you.” And I think that the way Kristian frames the skeptical posture—”tiredness and unwillingness to be duped again”—is both reasonable and an accurate description of the general vibe in 99.999% of the conversations I’ve had about this with anyone.

What I take away from this is that no one will be convinced to try a claimed “better social media” idea solely on the claim that it is “better.” That is, no matter how much of a critic someone is of existing social media systems, there is no argument that can be made by a rando on the internet that will convince them to try something else. Not because they hate the idea, but because the odds that a rando on the internet is trying to dupe them are far greater than the odds that there is a rando on the internet who is both not trying to dupe them and whose kooky idea has any chance of working. In other situations, I would come to the same conclusion; I believe the financial industry is sketchy AF, but if I got a message on twitter from someone who said “I have years of experience in investment banking; the system is badly broken; I have a way to design investments to fix it and you can participate easily and cheaply,” that would be a hard sell. It’s not that I disagree with the premise—it’s just: if your idea is so good, why are you trying to pitch it to me, instead of someone who knows what you’re talking about and might have the skills to help?

I’m not writing this post because I’ve had an epiphany or thought of a knockdown argument or surefire tactic. I’m writing it because I think this is a useful frame for thinking about what I’m trying to do, and I need to keep it in mind.