In my last post, I proposed three goals for enabling "non-practitioners" meaningful access to important technology conversations. When I posted it on Twitter, J. Khadijah Abdurahman made an interesting suggestion: 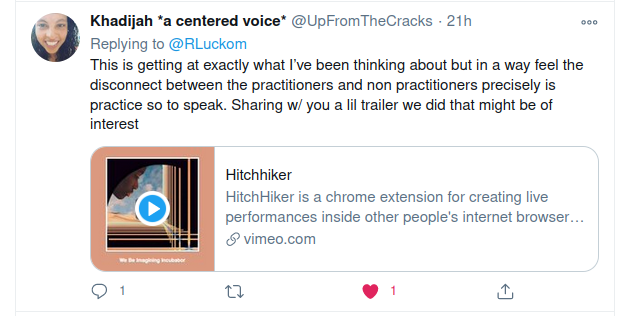 The tweet also references the video below, showing a trailer of a project that uses a browser extension to facilitate guided tours of the web. In the context of the tweet, my understanding is that it demonstrates an accessible way for anyone to author artifacts "made of internet." It is an example of internet-experience-creating technology that doesn't create a practitioner / non-practitioner dichotomy.

Hitchhiker from INCITE on Vimeo.

I think Abdurahman's note points at a complex and important conversation: the idea of a distinction between "practitioners" and "non-practitioners," especially as it's embodied in the choices offered to different people[1]. I have some pretty strong biases in this area:

These are some of my biases--everyone should feel empowered to be a practitioner[3], being a practitioner carries an unavoidable, 100% risk of frustration and (usually temporary) failure, and not everyone wants to be a practitioner. These biases push me toward the conclusion that efforts to extend access should deliberately address both categories, in addition to helping people move between them.

What would this look like in practice? I imagine two parallel gradients, one between practitioners and non-practitioners, and the other between "focus on the computing nuts and bolts" and "focus on the intersections between computer systems and one's stronger interests." Neither need be a binary choice, and people can inhabit changing positions depending on context. From the perspective of program design, both practitioners and non-practitioners should learn and participate together. From a wider societal perspective, my hope would be that the perceived distinction between the categories--the impulse to say "I'm not a technical person" because of feeling intimidted--would grow smaller.