Some history of the Naumkeag area

One of the things that has been most surprising to me, in researching traditional technologies, is how much is known about the pre-european-genocide[1] history of North and South America. In school, the past that I was taught about crossed the ocean with the first European settlers: before the Pilgrims was the Protestant Reformation; before the reformation, the Holy Roman and Ottoman empires; before those the Middle Ages; before that, Rome; before that, Egypt, before that, Mesopotamia; before that, nothing to speak of. In fact, we have evidence of people living in the few square miles that make up modern Salem from before “civilization” in Mesopotamia. And that’s true of pretty much everywhere in North America where people live now. We just don’t talk about it. In this post, I’m going to list some of the resources I’ve found useful for exploring this history.

First: there are many Indigenous people still living here. The Massachusetts Center For Native American Awareness is one Indigenous publication. In my neighborhood, many of the educational organizations are starting to include the history of the local Indigenous people; I found the page on the Naumkeag at the Witch House website to have many links to existing organizations.

There’s also a fairly large body of archaeological research into the history of this area. In 1993, when a new wastewater treatment plant was planned at Cat Cove in Salem, the Public Archaeology Laboratory excavated a complex of “shell middens”—sites where ancient people camped and processed food harvested from the ocean, such as cod and shellfish. Much of the summary information that follows is from the report of those excavations[2].

The report includes an extended timeline of prehistory in the Naumkeag area, with comparative dates from other places in the world: 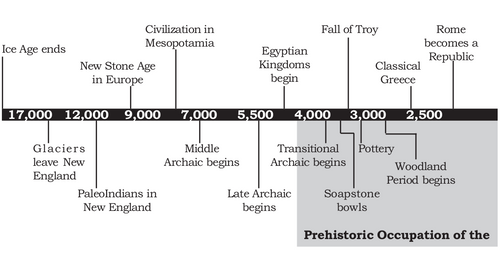 The report’s summary of prehistory in this area says:

Known archaeological sites in this area contain evidence of ancient Native American occupation from the PaleoIndian Period about 11,000 years ago to first contact with Europeans in the early seventeenth century.

One of the oldest sites in New England is near Bull Brook in Ipswich.A PaleoIndian base camp there contained hundreds of fluted projectile points, scrapers, flake knives, and other tools likely to be about 10,000 years old. At that time, sea level was much lower because glacial ice sheets located further north had not yet melted.Large areas of the Continental Shelf were exposed and the shoreline near Salem may have been about a mile east of its present location. PaleoIndian hunter-gatherers adapted to a spruce dominated forest with resources that were different from later environments.

Approximately 8,500 years ago, a warmer, drier climate allowed the spread of deciduous forest, including hardwood trees like oak, to grow in southern New England. During this initial stage of what archaeologists refer to as the Archaic Period, ancient Native American populations in the region developed methods for exploiting the animal and plant resources of temperate forest environments. Early Archaic Period sites near Salem have been found in the Ipswich River watershed in the towns of Boxford, Ipswich and Danvers. In the Middle Archaic Period, roughly 7,500to 5,000 years ago, Native American groups appear to have settled into fairly well defined territories in the larger river basins in southern New England. Ways of using seasonally abundant resources, such as spring-time fish runs and migrating birds established at the time, continued for the remainder of the Archaic Period. Tool kits expanded to include both chipped stone projectile points of the Neville and Stark type; drills and scrapers; and ground stone knives, woodworking tools(adzes, gouges), and whetstones. Many different locations in Essex County were used for base camps and smaller, special purpose sites. The lower Shawsheen and Ipswich River watersheds were probably core territories of Middle Archaic settlement.

In terms of numbers, the Native American population may have reached its zenith during the Late Archaic period, which ranged from 5,000 to about2,500 years ago. Archaeologists have identified distinct artifact styles from three cultural traditions, and settlement expanded into a wide range of environments within both inland and coastal areas. Like other sections of eastern Massachusetts, Essex County contains sites occupied by people of the Laurentian, Small Stem Point and Susquehanna traditions. Locations in the towns of Middleton, Danvers and Beverly were used for large habitation areas, small camps and burials. About 3,000 years ago, as the rise in sea level began to slow, estuaries formed and more locations in the Salem Harbor district were intensively used by Native Americans. The first use of shellfish documented by archaeological studies took place during this period, starting a trend that became much more important in the diet of later Woodland Period groups.

The Woodland Period covers the time span between about 2,500years ago and the first contact between Native Americans and Europeans. The Danvers River and Salem Harbor district was a core area of Woodland Period settlement. Estuary base camps and other site locations established throughout coastal Essex County at the end of the Late Archaic Period were often re-used by Early and Middle Woodland people. As in other places along the Massachusetts coast, Native Americans living around Salem Harbor and the Parker/Ipswich and Annisquam River estuaries intensified their collection and processing of shellfish during the Middle and Late Woodland periods. Shell middens were formed on many coastal zone sites. Important changes in technology and subsistence during the Woodland Period were the development of ceramic vessels for food storage and cooking purposes, and the introduction of domesticated plants such as corn, beans, and squash from regions further to the west. Maize horticulture added a new food to the diet of Native Americans, but did not replace hunting, fishing and gathering as the primary means of subsistence.

By the early to mid-sixteenth century, European explorers and fishermen had probably made some contact with the Native Americans living in the Essex County area. Two early explorers, Champlain (1605) and Smith (1614) stopped in Salem Harbor. From their descriptions we know that this area was densely settled and contained cleared fields used for planting corn. Smith recorded the Native American name of Naumkeag, or “fishing place” for Salem Harbor. The native people living there were Algonquins and shared similarities in language and culture with other groups living along the coast from eastern Massachusetts to southern Maine.